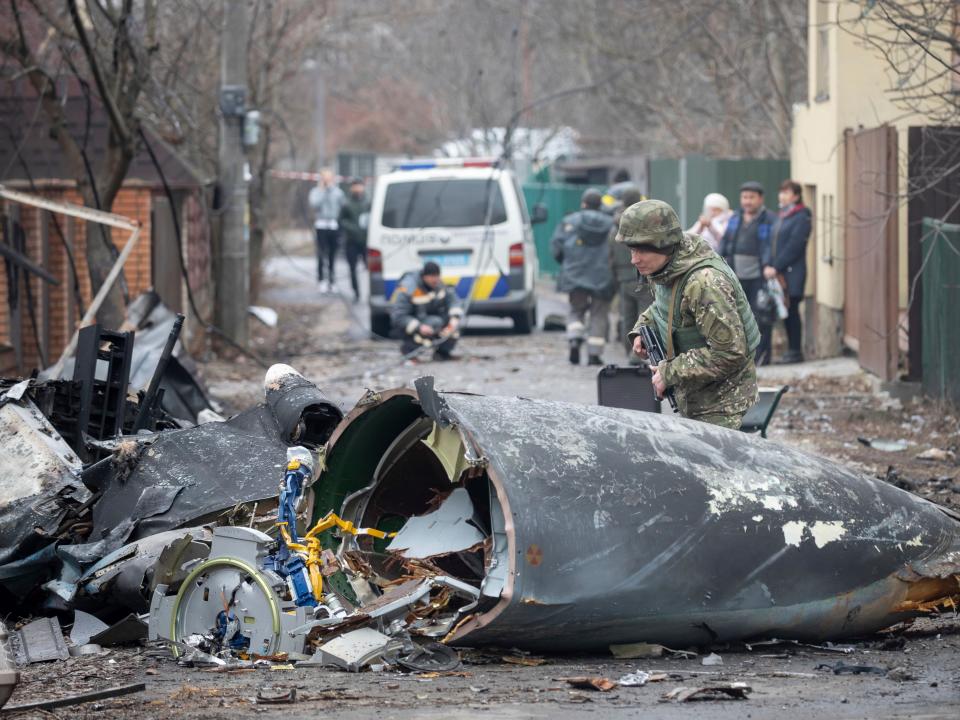 As Russia invaded the Ukraine, bitcoin plunged — here’s what Sam Bankman-Fried, Michael Saylor and other top voices in crypto had to say about it

Russian forces attacked Ukraine from several directions Thursday, starting a large-scale invasion that had been brewing for days.

Financial markets reeled and cryptocurrencies tumbled as investors sought out safe-haven assets. Bitcoin fell to its lowest in weeks, and strategists said it could drop to $30,000 if the crisis worsens.

That raised questions about bitcoin’s role — as a haven asset, a resource for the unbanked, and an authority-free zone. Here’s what five leading voices in crypto had to say about it.

“What should BTC be doing here? Well, on the one hand, if the world gets shittier, people have less free cash. Basically, selling BTC — along with stocks, etc.— to pay for war,” the CEO of crypto exchange FTX tweeted.

“So there are arguments both ways for what should be happening to BTC right now. I’m not really sure I would have guessed it would go down, based on the fundamentals.”

“There’s a push and a pull, with fundamental investors buying and algorithmic investors selling; on net, BTC ends up halfway in between, down 8% on the day.”

“But I also think we’re probably in a new regime than we’ve been in the last year and a half. We’ll have to see how things work here.”

“People often say that I shouldn’t wade into politics. And I keep reminding people the core of who we are as an industry is political, because our fight isn’t about a particular token having a higher price over another token,” Hoskinson, also a cofounder of ethereum, said on YouTube.

“Our fight is ultimately one of liberty and freedom — to give people the power to be their own institutions, to be their own bank. To verify what previously could not be verified, whatever that might be.”

“Bitcoin is a crappy tool for criminals but a brilliant one for charity and donations,” Melker tweeted as bitcoin donations to Ukraine’s army surged.

“The United States has to start considering what to do in a world where a large portion of the world doesn’t use the US dollar as their reserve currency,” the host of The Pomp Podcast said in a Substack post.

“The hypothetical situation would see Russia and China, who have long publicly stated their intention to get off the US dollar system, decide that the costs to using the current global reserve currency has become too high.”

“That incentive leads these superpowers to realize that bitcoin will be essential for decades to come. The countries that have a large ownership stake, along with conducting mining and other pro-bitcoin activities within their country, will have a significant advantage.”

Read more: A Wall Street veteran weighs in on why escalating Russia-Ukraine tensions are unlikely to delay the Fed’s hawkish campaign to raise rates — and shares 3 commodity-based strategies to leverage in this environment

Third US bitcoin futures ETF launches after weeks-long delay
Knowles (KN) Solid investment bets appear now: this is the reason
Bitcoin Shut To $50,000; Dogecoin Surges 11%
Bitcoin falls greater than 4per cent to close US$60,000
‘It’s a tough factor’ to suggest ‘an inferior’ crypto product
Bitcoin’s Worry and Greed Index at $49/100 after slight worth restoration
Previous ArticleDublin Bus is hiring for digital marketing role for over €46,000 per annum
Next Article Why Both Are Essential • TechLila